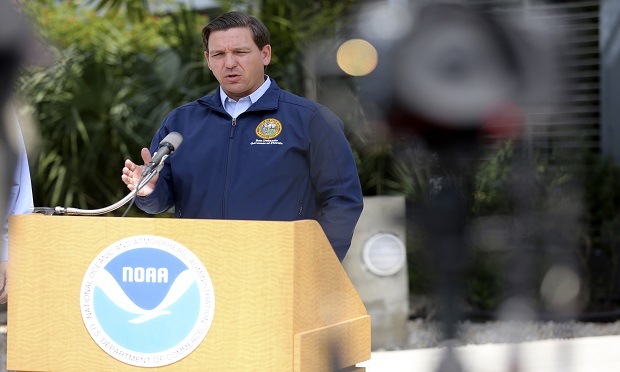 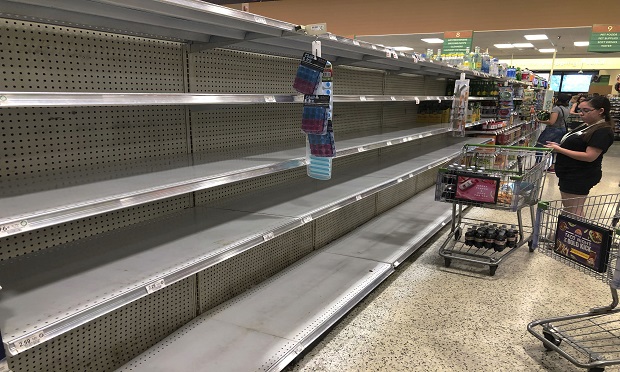 Store shelves are empty of bottled water as residents buy supplies in preparation for Hurricane Dorian in Doral, Fla., Thursday, August 29, 2019. The U.S. National Hurricane Center says Dorian could hit the Florida coast over the weekend as a major hurricane. (AP Photo/Marcus Lim)

Hurricane Dorian is now expected to become a Category 4 storm, with winds reaching 130 miles per hour within 72 hours as it barrels toward Florida’s east coast, aiming to become the first major hurricane to hit that area in 15 years.

The hurricane’s center was located about 220 miles (354 kilometers) north-northwest of San Juan, Puerto Rico at 11 a.m. New York time, moving northwest with sustained winds of about 85 miles per hour, according to the U.S. National Hurricane Center. Dorian is expected to gain strength as it moves over the water, with landfall expected over the Labor Day weekend.

While it’s too early to say where Dorian will hit, concern is growing among residents, vacationers and farmers. On its current path toward the central coast, it could impact counties with average insured values of $53 billion, according to Bloomberg Intelligence, while Chuck Watson, a disaster modeler with Enki Research, sees losses in the $10 billion range. About 60% of the main orange-growing region could eventually be affected.

“There is an increasing likelihood of life-threatening storm surge along portions of the Florida east coast late this weekend or early next week, although it is too soon to determine where the highest storm surge will occur,” according to the Hurricane Center update.

Florida Governor Ron DeSantis declared a state of emergency on Wednesday, and President Donald Trump urged residents in a tweet on Thursday to follow state and federal instructions.

“It is not out of the question that at landfall it is a Category 4,” which would carry winds of 130 mph to 156 mph, said Rob Miller, a meteorologist with AccuWeather Inc. in State College, Pennsylvania. He said it remains uncertain where landfall will occur.

A Category 4 hurricane can tear the walls and roofs off homes, snap most trees it hits, and topple power lines causing outages that could last weeks or months, the hurricane center said. Areas in the storm’s direct path could be “uninhabitable for weeks or months.’’

The Saffir-Simpson scale establishing hurricane categories runs from 1 to 5 with anything stronger than a 3 being classified as a major hurricane.

Hurricane Dorian looks like it will be hitting Florida late Sunday night. Be prepared and please follow State and Federal instructions, it will be a very big Hurricane, perhaps one of the biggest!

On key concern is if the storm slows as it hits the coast, said Ryan Truchelut, president of Weather Tiger in Tallahassee, Florida. This could raise the risk of flooding rains, he said.

“Somewhere is going to get destructive winds that are capable of doing structural damage,’’ Truchelut said by telephone. “The surge along the right of the track is going to be 9 to 12 feet in some places.’’

The northwest Bahamas and coastal sections of the southeast U.S. are expected to see 4 inches to 8 inches of rain this weekend and into early next week. Isolated rainfall accumulations of 12 inches are also expected, the hurricane center reported, adding that the rainfall may cause life-threatening flash floods.

The last major hurricane to make landfall along the central coast of Florida carrying winds of 111 mph or more was Jeanne in 2004, said Phil Klotzbach, a hurricane researcher with Colorado State University.

Dorian is threatening to become the strongest storm to hit anywhere in Florida since Hurricane Michael landed last year as a category 5 storm causing about $10 billion in insured losses.

If Dorian moves into central Florida, citrus growers “should be concerned because the event would bring a lot of rain and probably strong winds,” said Donald Keeney, senior agricultural meteorologist at Gaithersburg, Maryland-based Maxar. The state’s biggest producing counties include Hendry, DeSoto, Polk and Highlands, all located in that region.

Dan Richey, chief executive officer at Riverfront Packing Co. in Vero Beach, has reason to be concerned. His company, with 4,000 acres planted mostly with grapefruit, oranges and lemons, was last hit badly in 2004 by hurricanes Jeanne and Frances, when the company lost between 60% to 70% of the crop.

In its current path, Dorian could hit at least a quarter of the state’s major citrus areas, and its strength could knock fruit off trees and cause major damage, Drew Lerner, president of World Weather Inc. in Overland Park, Kansas, said by telephone. On a worst-case basis, he estimated the effect could reach 60% of the main orange growing region.

“This won’t happen until early next week, we are about four days away, so we have to be careful,” Lerner said. “There’s still plenty of time for the path to change.”

“Dorian may land as a weaker storm in an area with lower insured values than 2017’s Hurricane Irma. Insurers are already seeing pricing momentum, which could accelerate further in the event of a $10 billion-plus storm loss.”

While Dorian is a smaller storm, “if it follows the current path, it will be quite devastating and impactful to the entire industry,” Richey said in a telephone interview. His company is draining fields in preparation for a deluge, he said.

SeaWorld Entertainment Inc. said on Wednesday it has no plans to close its central Florida theme parks at this point. Walt Disney Co. didn’t immediately reply to a request for comment.

Royal Caribbean Cruises Ltd., the industry’s second-largest player, has closed its recently remodeled private island in the Bahamas, CocoCay, and won’t reopen it until Sept. 4. The company said over 400 people work on the island, and they need to go home to secure their homes and take care of their families. Passengers who prepaid for activities on that island will get refunds.