Dorian now a hurricane, will lash Puerto Rico on path to Florida 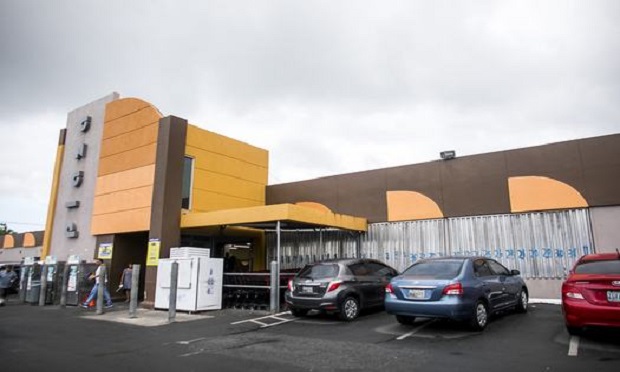 Steel panels protect the exterior of a supermarket ahead of Hurricane Dorian in Patillas, Puerto Rico, on Wednesday, Aug. 28, 2019. Hurricane Dorian is about to lash Puerto Rico with torrential rains, and then is expected to gain strength and become the first major hurricane to hit Florida's east coast in 15 years. (Photo: Xavier Garcia/Bloomberg) 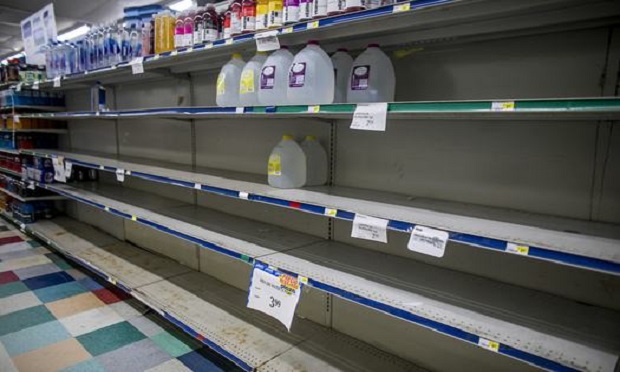 Water gallons sit on display for sale on a near empty shelve at a supermarket ahead of Tropical Storm Dorian in Patillas, Puerto Rico, on Wednesday, Aug. 28, 2019. (Photo: Xavier Garcia/Bloomberg) 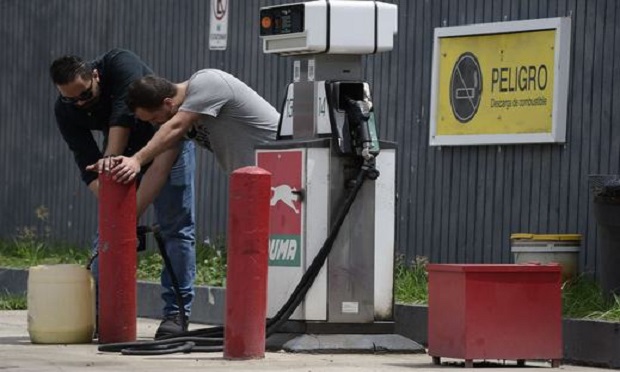 Citizens stock up on gasoline a few hours before the passing of tropical storm Dorian, in Canovanas, Puerto Rico, Wednesday, Aug. 28, 2019. Puerto Rico is facing its first major test of emergency preparedness since the 2017 devastation of Hurricane Maria as Tropical Storm Dorian nears the U.S. territory at near-hurricane force. (AP Photo/Carlos Giusti) 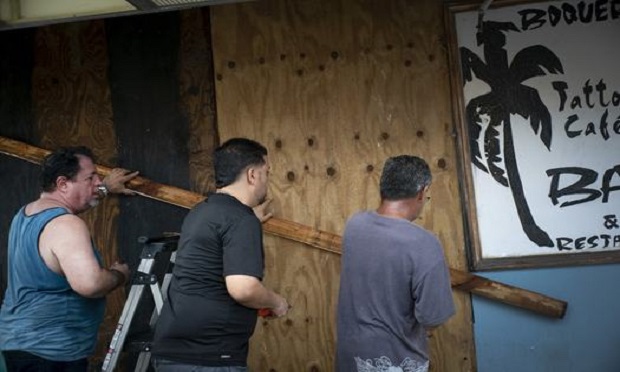 Men board up a shop's windows ahead of the arrival of Tropical Storm Dorian in Boqueron, Puerto Rico, Tuesday, Aug. 27, 2019. (AP Photo/Ramon Espinosa) 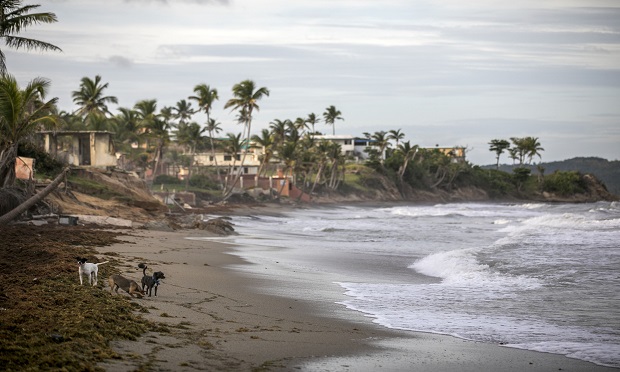 In the beach community "el negro,” the amount of water brought by Hurricane Maria caused many of these houses to be on the edge of the precipice. The strong swell destroyed a few houses. (Photo: Xavier Garcia/Bloomberg)

Tropical Storm Dorian has been upgraded to a hurricane as it heads toward Puerto Rico with torrential rains. It’s expected to gain strength and become the first major hurricane to hit Florida’s east coast in 15 years.

Dorian’s winds are now 75 miles (121 kilometers) per hour, making it a Category 1 hurricane, according to the U.S. National Hurricane Center’s 2 p.m. update. While it won’t hit Puerto Rico with the same force as Hurricane Maria’s 155 mph winds in 2017, it’s the first significant storm to threaten the island since then. And it’s getting more organized, the center reported.

Chances are increasing that the storm will approach Florida with winds of 115 mph, making it a Category 3 hurricane, the center reported. But first it will sideswipe the eastern corner of Puerto Rico within the next few hours.

The last major hurricane to make landfall along the central coast of Florida carrying winds of 111 mph or more was Jeanne in 2004, said Phil Klotzbach, a hurricane researcher with Colorado State University. Dorian threatens to become the strongest storm to hit anywhere in Florida since Hurricane Michael last year.

“The central coast of Florida and even up to the Carolinas should be watching out for this,” said Adam Douty, a meteorologist with AccuWeather Inc. in State College, Pennsylvania.

Dorian had reached St. Croix as of 2 p.m. New York time, making the U.S. Virgin Islands and Puerto Rico, still suffering aftereffects from Maria two years ago, as the most immediate concerns.

Dorian could drop 4 to 6 inches of rain on the islands, according to the hurricane center, and as much as 10 inches in some isolated places. That could spur significant flooding within Puerto Rico, where some homes and businesses are still covered with tarps following the devastation from Maria.

At the same time, the island’s aging and long-neglected power grid was all but destroyed when Maria hit, and remains suspect with parts of the U.S. territory regularly without power.

“Most of Puerto Rico will be spared,” according to Accuweather’s Douty. “There could be moderate impacts from power outages because their infrastructure is so fragile.”

Dorian is lopsided, with most of its power on its eastern side, which will be pointed away from Puerto Rico as it passes later Wednesday into early Thursday, Douty said.

President Donald Trump has approved a emergency declaration for Puerto Rico and ordered federal assistance for the territory to support local response. Meanwhile, residents of San Juan have been crowding into shopping centers to stock up on food and water, and boarding up windows to keep them from breaking.

“We are tracking closely tropical storm Dorian as it heads, as usual, to Puerto Rico. FEMA and all others are ready, and will do a great job. When they do, let them know it, and give them a big Thank You – Not like last time. That includes from the incompetent Mayor of San Juan!”

Puma Energy says it will shut both Bayamon and Guaynabo 2 oil product terminals in Puerto Rico as part of its storm protocol. Ports in St. Croix in the U.S. Virgin Islands and Puerto Rico are shutting, and Governor Wanda Vazquez has declared a state of emergency.

Ports in St. Croix in the U.S. Virgin Islands and Puerto Rico were shut on Wednesday as Dorian approaches, the U.S. Coast Guard said in a statement. A hurricane watch was issued for Vieques, Culebra and the Virgin Islands.

Meanwhile, tropical depression Erin is racing up the East Coast with winds of 35 mph, and is now located 190 miles southeast of Cape Hatteras, the hurricane center reported.

Erin will transition into a post-tropical system when it slams the eastern end of Nova Scotia late Thursday or early Friday. A cold front moving across the eastern U.S. will tap into its moisture and bring heavy rain to eastern New England, including Boston, late Wednesday, Accuweather’s Douty said.

Flash flood watches have been posted across parts of Rhode Island, Massachusetts, New Hampshire and Maine, a coastline crowded with tourists for the upcoming Labor Day weekend holiday.