Bermuda, preparing for the worst, lucked out when Hurricane Igor's wallop was not as strong as anticipated--leaving behind losses of less than $100 million.

Bermuda, preparing for the worst, lucked out when Hurricane Igor’s wallop was not as strong as anticipated–leaving behind losses of less than $100 million. But damage was also limited by strong building codes, catastrophe modelers reported.

Igor passed Bermuda late on Sept. 19 as a Category 1 storm, with winds around 70 miles-per-hour. The entire island experienced hurricane-force gales as the storm approached because Igor’s winds extended out 90 miles. 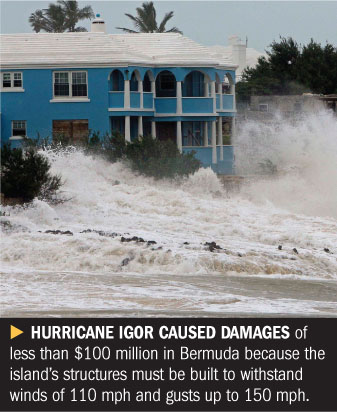 However, modeler AIR Worldwide said it estimates insured losses from Igor will likely fall below the $100 million mark.

Review the potential claims brokers could face from ESG issues as well as steps to reduce those professional risks.