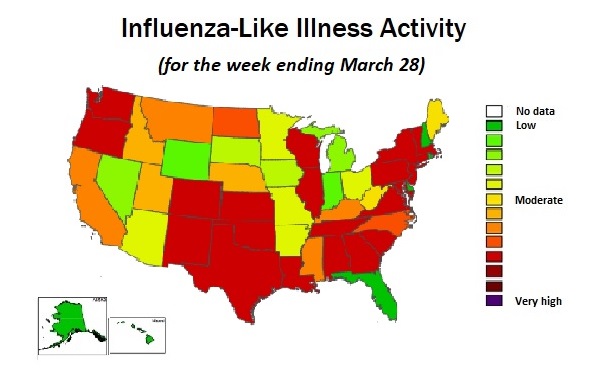 In the week ending March 28, the CDC's COVID-19-tracking map was full of sick, red states. Here are 3 more images, based on CDC data, that show how the pandemic picture has changed... 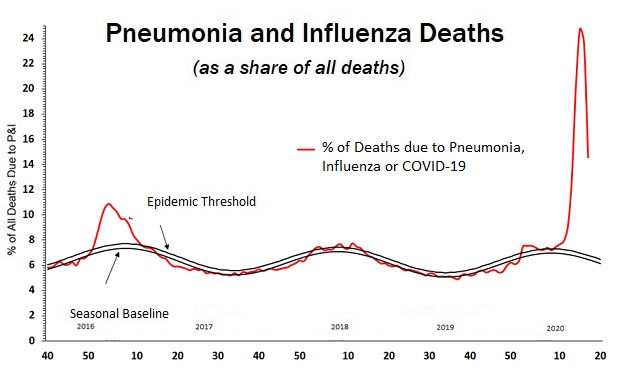 3. The percentage of all U.S. deaths caused by COVID-19, and COVID-19-look-alikes, fell to about 18% in the week ending April 25. That's down from about 25% earlier, but it's still about three times as high as the epidemic threshold. 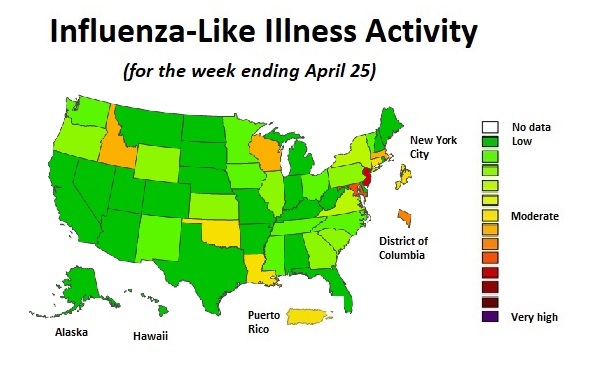 2. During the week ending April 25, outpatient activity fell in most of the country, but it held steady at a moderate level in Idaho and Wisconsin, and it flared up in Iowa, Minnesota, Mississippi and Oklahoma and Wyoming. 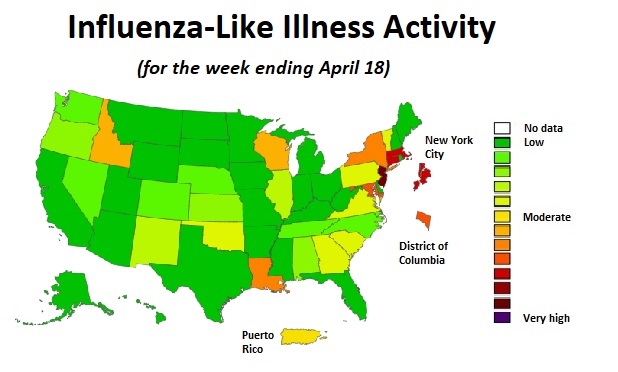 1. By the week ending April 18, the number of states with many patients seeking care for COVID-19 and flu-like illnesses from primary care offices, urgent care clinics and emergency rooms fell sharply. The main high-intensity areas were in New York, New Jersey and Massachusetts.

The latest government COVID-19 tracking report shows that outbreak activity appears to be falling in most of the country, but that activity may be starting to creep back up in some states.

The number of patients seeking care for the disease from primary care offices, urgent care centers, and hospital emergency rooms has fallen to a low level in most of the country.

But the number of patients seeking outpatient care for COVID-19 moved up some in Iowa, Minnesota, Mississippi, Oklahoma and Wyoming.

One sign of how rapidly COVID-19 was spreading a few weeks ago is that, in the week ending April 25, about 18% of all U.S. deaths were caused by COVID-19, or by something that looked an awful lot like COVID-19. That’s down from 25% for the weeks ending April 11 and April 18. But, in a normal week, fewer than 6% of deaths are caused by pneumonia or a flu-like illness.

To make up for the problems with COVID-19 testing, the weekly COVID-19 tracking reports give outpatient visit numbers, hospitalization numbers and death numbers for pneumonia, influenza and “influenza-like illnesses” as well as for laboratory-confirmed cases of COVID-19.

Public health authorities define an “influenza-like illness” as a patient who has a fever over 100 degrees, along with either a cough or a sore throat.

The CDC depends on states to collect and report the data, and it notes that the data for the latest few weeks may be especially incomplete.

The total number of deaths from all causes was also high in New York state as a whole, in New Jersey, and in Massachusetts.

For the country as a whole, for the entire period from Jan. 25 through April 18, the CDC has reports of a total of 692,949 deaths, compared with an expected total of about 686,000. For that period, for the whole country, the number of deaths the CDC has recorded is about 1% higher than the expected level.