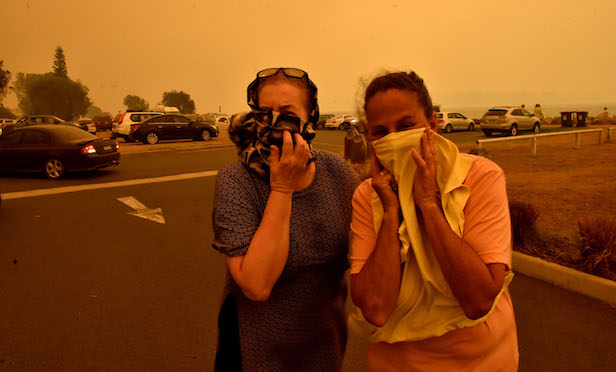 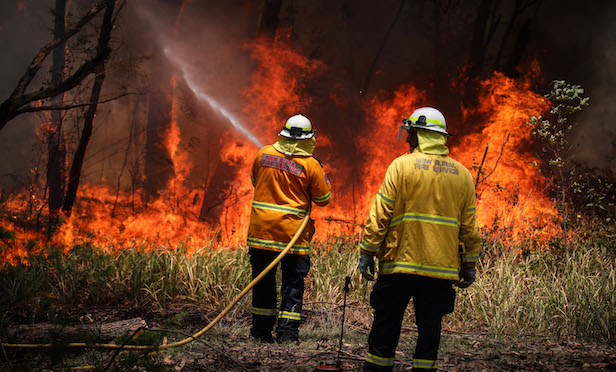 The early and devastating start to this year's bushfire season has reignited the climate change debate in Australia, the world's largest coal exporter and one of the largest emitters of greenhouse gases. Prime Minister Scott Morrison and his conservative Liberal Party have been heavily criticized for their climate policies and failures to reduce greenhouse gas emissions, as per Australia's commitment to the Paris Climate Accord. 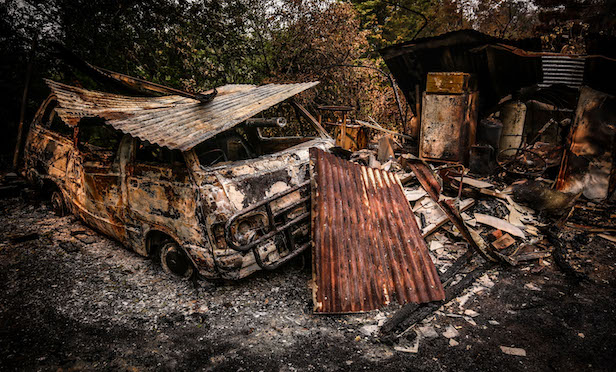 The remains of a van sits outside a home recently destroyed by bushfires in the town of Bilpin, located west of Sydney in New South Wales, Australia. (Photo: David Gray/Bloomberg) 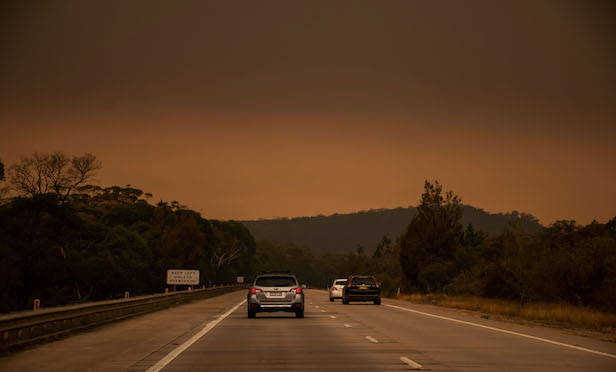 Smoke and haze are worsening the air quality in and around fire-affected states, including Brisbane, Sydney, Canberra & Melbourne. (Photo: Shutterstock) 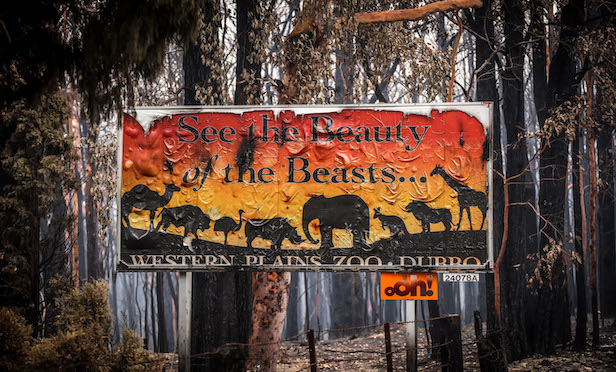 Experts estimate nearly half a billion animals have been killed in the bushfires, including one-third of the total koala population. Scientists have expressed concern that a number of native species could now be considered threatened or endangered, and some might be wiped out entirely. (Photo: David Gray/Bloomberg) 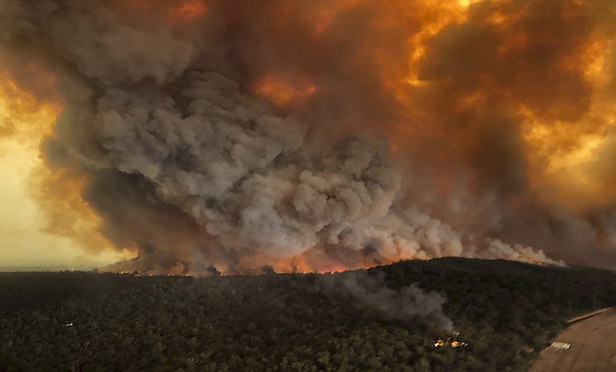 Wildfires rage under plumes of smoke in Bairnsdale, Australia. So far this bushfire season, roughly 16 million acres have been burned with much of Australia's summer season left to go. (Photo: Glen Morey via AP) 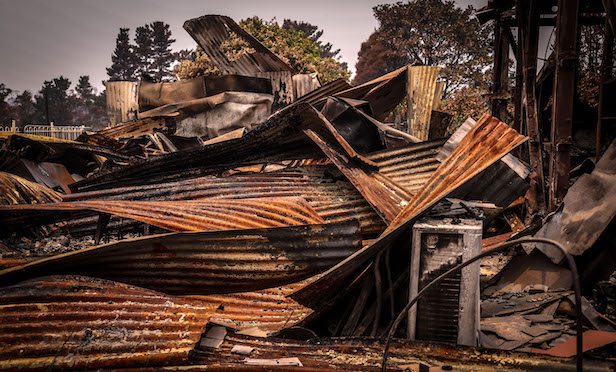 A home recently destroyed by bushfires can be seen near the town of Bilpin, located west of Sydney in New South Wales. (Photo: David Gray/Bloomberg) 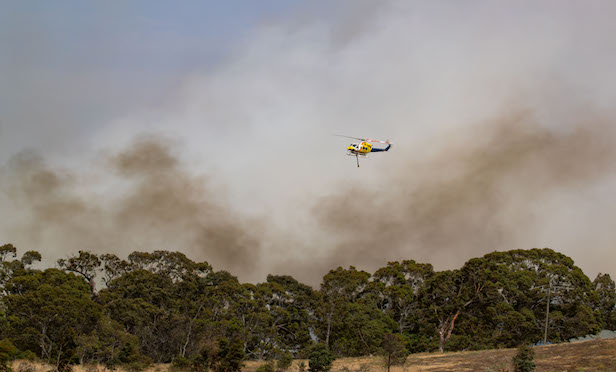 Here, a helicopter can be seen flying against plumes of smoke while fighting bushfires in Victoria, Australia. (Photo: Shutterstock) 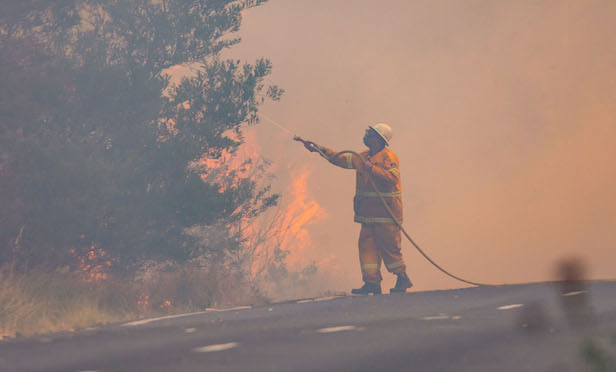 After months of continuous burns, Australia’s bushfire crisis took a turn for the worse over the holiday season as hot, dry conditions, strong winds and persistent drought fueled the flames of hundreds of fires throughout the continent.

Reports estimate about 2,000 homes have been lost, 24 lives have been claimed, and roughly 500 million animals have perished in the fires thus far — and the threat is far from over as forecasters warn the fires could continue to burn for months.

Analysts project that payouts from the bushfire crisis could exceed $485 million ($700 million AUD) in the coming months, and if so, would lessen insurer profits and put pressure on future premium rates.

IAG, Australia’s largest insurer, reported Friday that claims from the catastrophic bushfire season have surpassed its natural disaster claims budget for 2019. IAG said it has received more than 2,800 fire-related claims since September, totaling an estimated value of $160 million.

IAG said it expects to pay out close to $400 million for natural disaster claims from the second half of 2019, which is above the insurer’s allowance for that period of $320 million and is 60% of its annual “perils” budget of $640 million.

The roles of climate change

Following years of worsening bushfire events and conditions, the early and devastating start to this year’s bushfire season has reignited the climate change debate in Australia, prompting even more questions about the government’s widely criticized climate policies.

As the world’s largest coal exporter and one of the largest emitters of greenhouse gases, Australia has been targeted for its apparent failures to meet its agreement to reduce its greenhouse gas emissions by 26-28% by 2030, as per the Paris Climate Accord — a goal that was first criticized for being too low. Considered champions of Australia’s large coal industry, Prime Minister Scott Morrison and his conservative Liberal Party are enemies of environmental groups and climate activists and have received backlash for denying any role of climate change in worsening bushfire conditions or the ongoing bushfire crisis, including from insurance groups.

The Insurance Council of Australia (ICA) recently issued a statement on climate change, insurance affordability and accessibility in which ICA aimed to address concerns that parts of Australia will inevitably become uninsurable or unaffordable due to climate change, and affirmed its support of combating its effects.

“It is important that extreme weather projections based on climate change models are agreed upon and understood by all relevant stakeholders before they are used in a way that may unnecessarily scare householders and businesses, disrupt communities and lead to poor decisions and outcomes,” the statement reads. “The Insurance Council of Australia (ICA) supports the need for well-coordinated and prudent action on climate change.”

The ongoing bushfire crisis has spurred other serious environmental consequences.

Experts estimate nearly half a billion animals have been killed in the bushfires this season, including one-third of the total koala population. Scientists have expressed concern that a number of native species could now be considered threatened or endangered, and some might be wiped out entirely.

The fires are also estimated to have released 350 million metric tons of carbon dioxide, comprising nearly two-thirds of Australia’s total annual CO² output and totaling an output climate experts warn would require over a century for forests to absorb. In a new Nationwide survey, 78% of health care business owners said it's difficult to find agents with specialized knowledge.