Many anticipate future reductions in auto claims frequency due to crash avoidance systems and self-driving cars, but what is happening now? With economic growth still slow, auto sales are anticipated to peak at 16 million annually. Of the numerous factors that have helped drive down frequency over the last 20...

The disruption in the pattern of between 16 and 17 million new vehicle sales that coincided with the recession created a break in the historic sales cycle that essentially led to a greater disparity within the vehicle fleet. With fewer new cars sold, the average age of vehicles increased, therefore leading to a historically older vehicle population. At the same time, new vehicle sales have ramped up, creating a modest surge in the number of new vehicles on the road.

The breakout of repairable vehicle appraisal data by the age of the loss vehicle underscores the shift that has occurred in the last several years to a markedly older mix. Nearly 42 percent of all repairable appraisals were for vehicles aged 7 years and older during the 2013 calendar year—the highest ever recorded in the last 15 years, and more than 15 percentage points higher than in 2005.

Over the last 4 years (2010-2013) new vehicle sales grew, and their share of the repairable appraisal volume also grew. The implications of a newer fleet are essentially the reverse of an aging fleet: more replacements versus repairs, lower non-OE parts utilization, and an increase in total labor hours per appraisal, all of which lead to higher repair costs. 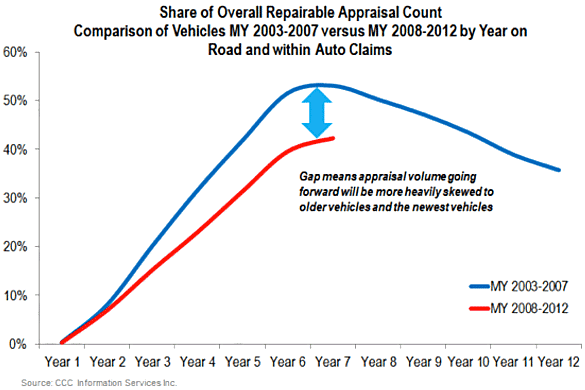 The assumption made here is that much fewer vehicle sales of these model years is what drives this gap in volume share when compared to the historical trend typical for vehicles as they age. Subsequently, the remaining share will be made at first of mostly older model year vehicles, but will also over time see more of the newer model year vehicles.

As automakers race to meet the ever stricter corporate average fuel economy standards, one of their key challenges is to reduce the overall weight of the vehicles themselves. This has driven up automakers’ use of lighter-weight substrate metals, such as aluminum and magnesium. As technology reduces the cost and speed of vehicle development through advances in electronic modeling and CAD systems, manufacturers can select different materials and joining methods within a single vehicle body structure. The result is a potential combination of materials: ultra-high strength steel, high strength steel, mild steel, aluminum and tailored blanks all used in a single vehicle structure.

Over the years, automakers have added a great many features to their vehicles to protect the vehicle occupants during a crash. This has resulted in more and more airbags added to their vehicles. And while the benefits of these occupant safety features has been well documented, a great deal of focus today is on how to avoid the accident altogether. Automakers have begun adding technology to the vehicle itself to either warn or over-ride the driver to avoid a crash. These include systems such as forward looking radar, lane departure warning, blind spot detection, and vehicle-to-vehicle communication. The effectiveness of these systems has been tested at length by the automakers and safety organizations, and show dramatic reductions in accident frequency can be achieved—the Highway Loss Data Institute projects as many as one in three fatal crashes could be avoided.

The cost of many of these crash avoidance systems has also come down in the last several years. Lower costs will increase adoption amongst automakers and consumers; and while it may not eliminate every accident, it should help reduce the severity of the crash. However, data released by the Highway Loss Data Institute in September 2011 showed that it typically takes up to three decades before 95 percent of the vehicles on the road have a given safety feature offered as either a standard feature or available option. For example, 95 percent of all registered vehicles will finally have frontal airbags by 2016. This comes many years after manufacturers began adding them in meaningful numbers in the mid-1980s.

Analysis of the share of vehicles by model year and by loss coverage, as well as an estimation of the ‘take-up’ rate of crash avoidance systems based on availability and consumer purchase suggests the impact on auto claims to date has been relatively small.

So while there is certainly an anticipated reduction in automotive claim frequency over the next 25 to 35 years because of the introduction of crash avoidance systems and the much-anticipated emergence of self-driving vehicles, the primary question remains ‘how fast will it happen?’

A rapid ramp up in new vehicle sales where more are equipped with these systems could dramatically shift into overdrive this trend. However, economic growth is still slow, auto sales are anticipated to peak at 16 million annually, and scrappage rates are at historic lows. Of the numerous factors that have helped drive down frequency over the last 20 years—such as aging drivers, fewer miles driven, more growth in urban areas, emergence of car-sharing programs, the recession, and so forth—the adoption of these systems has the likelihood of a sharper ramp up the decline in automotive claims frequency.