Prickly Liability Issues: Purposely Distract a Driver or Help an Adulterer - Who Will Pay?

P&C insurers face an array of complex issues in 2014, from determining liability for texting a driver who becomes involved in a crash, to lawyer-sponsored sites for adulterers.

Perusing various sources of information reveals some interesting developments that can raise questions about insurance coverage. For example, the New Jersey Appeals Court decided that sending a text to someone you know is driving—and who will read it at the same time— can lead to legal responsibility for the sender if the driver has an accident.

The judge in that case said, “when a texter knows or has special reason to know that the intended recipient is driving and is likely to read the text message while driving, the texter has a duty to users of the public roads to refrain from sending the driver a text at that time.”

The court also noted that if the sender of the text does this, then the sender “has taken a foreseeable risk in sending the text, has knowingly engaged in distracting conduct, and it is not unfair to hold the sender responsible for the distraction.”

If this judicial reasoning becomes the norm and the sender of the text is held legally responsible—at least partially—for an auto accident, then is insurance coverage available under the auto policy?

Let’s say that a man named Mr. Smith decides to text a friend or business associate when Smith knows the person is driving and will read the text immediately. How will Smith’s personal auto policy or business auto policy respond if the friend or associate has an accident because he was distracted as a result of reading the text?

Both the personal auto policy and the business auto policy declare that the insurer will pay damages for bodily injury or property damage for which the insured becomes legally responsible because of an auto accident. Currently, there are no exclusions in either policy that would prevent coverage for the insured under these circumstances; and at the very least, defense costs for the insured would have to be paid if the insured is brought into a lawsuit. Of course, some states have passed laws prohibiting drivers from text messaging and this could possibly be used by an insurer to deny coverage, but that is just one of the many legal issues that lawyers and courts will have to tackle when the claims reach the legal system.

Another item to consider pertains to alienation of affection lawsuits directed at attorneys. A post I recently read tells of a husband who is suing an attorney owned website that assists married individuals in the quest of an affair. The husband claimed that his wife left him for another man she met on the website. No doubt the attorney has general liability and professional liability insurance, but would either policy actually apply to such a claim? 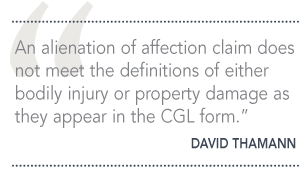 Furthermore, professional services are defined as “services rendered by an insured as an attorney, arbitrator, mediator, title agent, notary public, administrator, conservator, receiver, executor, guardian, or trustee or in any other fiduciary capacity, provided such services, for which the insured is licensed, are rendered in connection with the named insured’s practice of law.” Is administering a website for those seeking an affair a professional service in line with the practice of law? This is a coverage issue, one the insured attorney and his insurer will have to settle.

Finally, we have the amazing announcement that Amazon plans to make deliveries by drones. Presuming the government allows this plan to take effect, what type of insurance coverage  issues will develop? There would seem to be plenty.

If the drone were to fall out of the sky because of mechanical problems and hit a house causing BI and PD, then does the insurer of the maker of the drone handle the claim or does Amazon’s insurer do that? If weather conditions force the drone down onto a house, is Amazon’s insurer going to pay a resultant claim? Will homeowners’ insurance cover the loss? Suppose the drone delivers the package to the wrong house or an empty house and the package gets stolen? Where is the coverage? Moreover, if the drone has picture-taking capabilities (for whatever reason) and flies over a house snapping photos of the people on the ground—is this an invasion of privacy that can lead to a lawsuit?

Now if the use of drones becomes commonplace, would insurers start to use them for inspecting the homes and businesses of prospective clients, or even use them to inspect property losses? Would this ostensibly remove the human element out of the insurer-policyholder relationship? The federal government and/or state governments may pass laws regulating the use of drones that can by-pass insurance coverage disputes, but this is most likely an issue that will not be addressed for years to come. Who knows?

These are only a few items that can present future issues and problems for those in the insurance industry, but perhaps they are items that some future-oriented persons should ponder.