Adding to an unusual year for U.S. weather, the weekend's Midwest tornado outbreak could be the most expensive storm event to have occurred in November.

The weekend’s deadly storm outbreak in the Midwest may cost up to $1 billion, says RMS, and could rank as the most expensive of the top five catastrophes of its kind to have occurred in November since 1950.

“Sunday’s big tornado outbreak is yet another atypical storm of what has been an unusual 2013 severe weather season,” said Matthew Nielsen, RMS director and meteorologist in a statement. So far, the three largest tornado outbreaks of 2013 have occurred in January, October, and November, all outliers of the usual spring/summer peak.

More than 80 preliminary tornado reports were filed in relation to the storms that killed six people, as well as incidences of hurricane strength winds, heavy rain, lightning and large hail. The storm system affected as many as 10 states, including Illinois, Indiana, Kentucky, Missouri and Michigan.

State Farm spokeswoman Holly Anderson says the insurer has received 3,300 homeowners claims in Illinois, 1,900 in Idaho, 1,000 in Michigan, and 400 in Ohio as of Wednesday.

The greatest damage occurred in Illinois, where tornadoes and thunderstorms flattened entire neighborhoods. One EF-4 tornado in New Minden, Ill., was one of only 20 tornadoes of similar strength to occur during November since the middle of the last century.

In Chicago on Sunday, thousands of customers were left without power, an NFL football game was delayed, and flights were delayed at two major airports.

“It will be a week or two until there is a better sense of the losses,” says Steve Bowen, senior meteorologist at Aon Benfield. “The main takeaway from Sunday’s outbreak is that most of the major metropolitan areas in the Midwest were largely spared from extensive damage. Had one of those metro regions taken a direct hit, the level of devastation and losses would be even greater than what we’re already seeing in some of the smaller communities impacted in Illinois and Indiana.”

The weekend’s storms were a turning point for an otherwise calm year for convective storms and tornadoes—previously, says the Insurance Information Institute (III), only 818 tornadoes were confirmed this year, the lowest annual count since 1988.

Now, however, there have been five severe weather outbreaks in the U.S., the third-highest total in the country’s history behind the 2011 and 2012 seasons. The most expensive and deadliest single tornado outbreak occurred in May and devastated Moore, OK. which cost about $562 million in insurance payouts.

RMS says the magnitude and severity of Sunday’s tornado outbreak was caused by unseasonably strong thermodynamic instability and strong wind shear. Spring and summer months are good hosts for storms because of their strong daytime heat. According to the III, nine out of the top 10 costliest U.S. tornadoes occurred between April and May. One occurred in October.

Specifically, says Aon Benfield, the conditions that coalesced in supercell thunderstorms and long-track tornadoes on Sunday included a rapidly deepening surface area of low pressure in the Midwest/Great Lakes; moisture and heating ahead of the advancing cold front; the presence of an upper level trough; strong wind shear; and a vigorous mid-level jet stream with wind speeds in excess of 120 mph.

Furthermore, Sunday’s storm was unique because of the geographic span of its tornado warnings, which reached Wisconsin and Michigan. RMS’s Nielsen tells PC360 that the powerful Sunday tornadoes in Illinois may “go into the record books” as the second and fourth most northerly EF4s in November.

Nielsen says North American jet stream is further north than usual in 2013, leaving the storm-struck region vulnerable to another outbreak for another week or more, whereas average thunderstorm activity at this time of year occurs near Arkansas and Mississippi.

RMS says the storms highlight “the importance of capturing these types of events from a catastrophe modeling perspective, even if historical records don’t.” 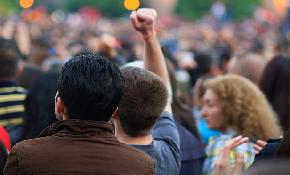