Leading U.S. homeowners insurers recorded combined ratios well over 100 in 2011 due mainly to storms throughout the year, according to an SNL Insurance analysis.

Leading U.S. homeowners insurers recorded combined ratios well over 100 in 2011 due mainly to storms throughout the year, according to an SNL Insurance analysis. 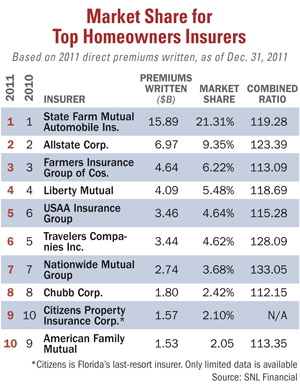 In a Swiss Re ranking of the top-10 costliest disasters of 2011, severe U.S. storms accounted for half of the year’s events. April 22 storms that mostly affected Alabama placed highest among the U.S. storm events with $7.3 billion in estimated insured losses, good for the fourth-costliest catastrophe of 2011. The storms beginning on May 20 that spawned the Joplin tornado days later placed fifth on the list with $6.7 billion in estimated losses.

Three other storm systems in April accounted for the 8-10 spots on the list.

As far as direct-written-premium growth in 2011, Florida’s last-resort insurer, Citizens Property Insurance Corp., saw the largest year-over-year premium growth among the top-20 insurers, far outpacing any other company with a 35.5 percent rise in premiums written, according to SNL’s data. Citizens was ranked 9th for direct written premiums, up from 10th in 2010.

At the other end of the spectrum, 19th ranked Allianz SE saw a 10.84 percent decline in direct-written premiums.