Property-catastrophe reinsurance rates in the United States have significantly decreased despite disaster losses from the Chile earthquake and storms in Australia.

By Katharine Rose | July 18, 2010 at 08:00 PM | The original version of this story was published on National Underwriter Property & Casualty
X

Property-catastrophe reinsurance rates in the United States have significantly decreased despite disaster losses from the Chile earthquake and storms in Australia during the first half of 2010, according to reports from a trio of top brokers on July 1 renewals.

Guy Carpenter’s report–”Reinsurance Renewal July 1, 2010: Capital Cushion Continues to Impact Pricing” –found that property rates have decreased by 10-to-15 percent. Willis Re said rate reductions were as high as 25 percent in Florida, while Aon Benfield reported property-catastrophe price declines of 10-to-20 percent.Guy Carpenter’s report (http://bit.ly/bDDk8C)–examining reinsurance conditions across the property, marine and energy, workers’ compensation, international casualty and other markets–found that overall, reinsurance rates have continued to decline. 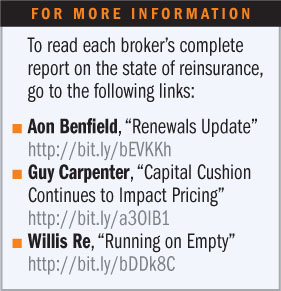 Once the realm of major accidents and deaths, workers’ comp carriers are facing loss of consortium claims for a range of incidents such as car accidents.