Tom Slattery, Former Editor Of NU, Passes Away At 68

Thomas J. Slattery, for many years the editorial leader of National Underwriter, passed away on May 14 of respiratory failure at the age of 68.

By Staff Writer | May 23, 2010 at 08:00 PM | The original version of this story was published on National Underwriter Property & Casualty
X

Thomas J. Slattery, for many years the editorial leader of National Underwriter, passed away on May 14 of respiratory failure at the age of 68.

Mr. Slattery started with The National Underwriter Company in March 1967 as a staff writer. He rose through the ranks to serve as Managing Editor, running the day-to-day news operation of both the property and casualty and life and health editions of the NU weeklies. 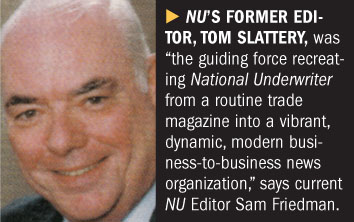 He later served as Editor in Chief and Executive Editor of both editions, and was publisher of the newsweeklies for a time as well. For many years he chaired NU‘s Editorial Committee, writing most of the magazine’s lead opinion pieces. Late in his career, he wrote his own column for NU.