Is U.S. Casualty Next For Validus?

We have a higher cost of capital because we're in a volatile class," he said, referring to the heavy weighting of the company's business in catastrophe lines.

By Susanne Sclafane | March 07, 2010 at 07:00 PM | The original version of this story was published on National Underwriter Property & Casualty
X

After winning a long, drawn out battle to combine with IPC Re last year in a merger deal valued at $1.6 billion, Validus Holdings’ Chief Executive Officer Ed Noonan hinted recently that the deal, which he often describes as “transformational,” may not have been transformational enough.

While the 2009 deal that propelled Validus to more than $4.0 billion of capital from just about $1.9 billion at year-end 2008 had all the intended benefits, including giving Validus a leadership position in the property-catastrophe reinsurance market, the combined company remains a specialist in short-tailed lines, Mr. Noonan noted during a recent conference. 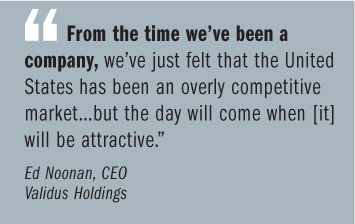 During a Bank of America Merrill Lynch Insurance Conference late last month, Mr. Noonan, when asked about his appetite for acquisitions going forward, mused about the possibilities–at some future date–of moving into the U.S. market and diversifying the book to include casualty business.

People on the move in the P&C insurance industry: September 24, 2021

News from Beazley, Pool Re, One Call and more.