Reinsurance and excess and surplus lines purchases would be governed by the tax policies, licensing and other requirements of the buyer's home state...

By Arthur D. Postal | December 20, 2009 at 07:00 PM | The original version of this story was published on National Underwriter Property & Casualty
X

Reinsurance and excess and surplus lines purchases would be governed by the tax policies, licensing and other requirements of the buyer’s home state under a provision added to the House version of financial services regulatory reform legislation passed by the House on Dec. 11. 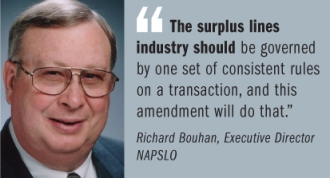 The amendment contained in the House bill reflects the same language passed by the House as the stand-alone Nonadmitted and Reinsurance Reform Act of 2009, known as the NRRA.