Lloyd's Sees Profits Cut In Half For 2008, But Satisfied Given State Of The Economy

Profits at Lloyd's last year plunged to $2.7B--less than half of the $5.66B reported for 2007--but its CEO was counting his blessings, contending the market's positive bottom line was "a pretty good result" given the state of the economy.

Profits at Lloyd’s last year plunged to $2.7 billion–less than half of the $5.66 billion reported for 2007–but its chief executive was counting his blessings, contending that the market’s positive bottom line was “a pretty good result” given the state of the financial markets and overall economy. 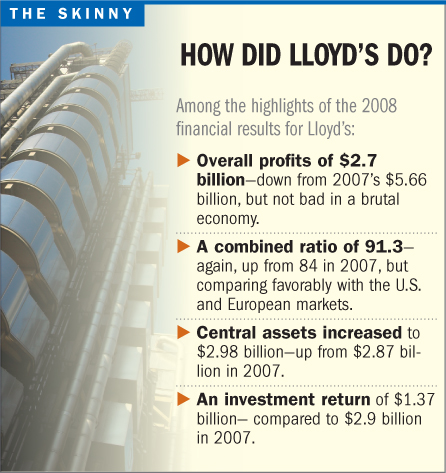 Lloyd’s cited strong underwriting discipline and conservative investment strategies as the reasons for remaining in the black during a sharp downturn on both Wall Street and Main Street.

Indeed, Richard Ward, Lloyd’s chief executive officer, told National Underwriter that “to have a profit in the conditions that we had to trade through 2008 is a pretty good result. Investment income was getting trashed throughout 2008, and yet we were able to return a positive number for investment–a 2.5 percent investment return,” totaling ?1 billion ($1.4 billion at current exchange rates).