Nothing about the U.S. decision to pull out of Afghanistan has been easy. The impact has been felt around the globe, and the long-term ramifications are still to be determined. For the insurance industry, one of the unexpected areas affected by the withdrawal involves workers’ compensation claims.

Many may not consider the civilians who work in hotspots around the globe supporting the military’s efforts in places that are only names in a news report for most of us.

In the latest Insurance Speak podcast, Eric Richardson, senior client services manager for Gallagher Bassett, explains some of the claims the company is seeing from workers who have been working in highly hazardous conditions where they are exposed to dust, fumes and oppressive heat, and are in constant fear for their lives. Even those who work in less hazardous areas like one of the U.S. embassies are still exposed to many of these threats.

Gallagher Bassett has been adjusting Defense Base Act Claims or overseas workers’ compensation claims that fall under federal jurisdiction for nearly a decade for multiple carriers. Since August, the company has seen an increase in the number of claims related to civilian workers suffering from post-traumatic stress disorder (PTSD) resulting from their experiences in Afghanistan.

The Defense Base Act is an extension of the Longshore Act and covers categories of workers not covered by U.S. workers’ compensation programs, explains Richardson. The model for most overseas programs is to leverage contractors for a specific period, and this can be a significant portion of the workforce in a foreign country.

“We will see all types of claims that we would normally see domestically, as well as war hazards you wouldn’t normally see,” continues Richardson. “The contract support needs to be at the bases, and that puts these workers at risk.”

Richardson shares that the company has seen a rise in PTSD claims over the last few years, from workers operating in these environments. They are constantly exposed to these factors, and being in fear for their lives exacts a very high toll on these contract employees.

To hear more of this fascinating conversation, listen to the podcast above or subscribe to Insurance Speak on Spotify, Apple Music, Google Play or Libsyn. 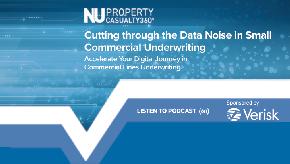 Cutting through the Data Noise in Small Commercial Underwriting

Underwriters are working with a wealth of data at their disposal, but finding the right data at the right time can still be a challenge. In this podcast, Verisk’s Tracey Waller discusses how to cut through that noise.