Here are the insights insurance pros need to know to advise clients and navigate the 2020 hurricane season.

Flood risk and private flood insurance: An overview for businesses 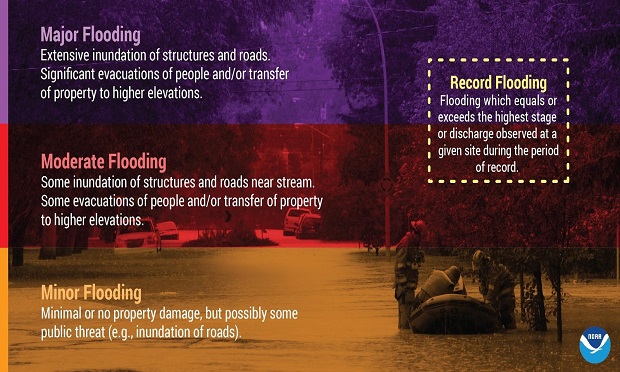 Categories of flooding are major, moderate and minor. (NOAA) 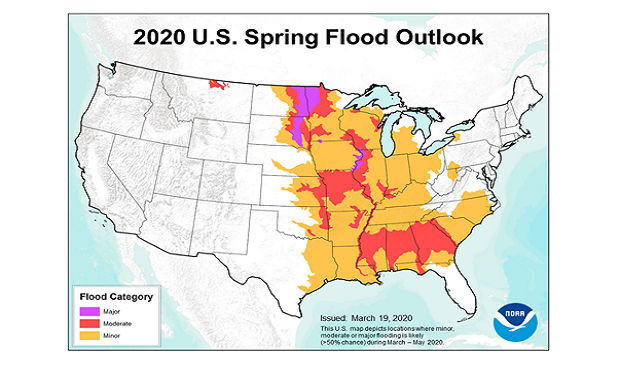 This map depicts the locations where there is a greater-than-50% chance of major, moderate or minor flooding during the spring period of March-May 2020. (NOAA)

One role of an insurance professional is to think on behalf of commercial lines prospects and customers — and communicate with them about the risks their small businesses face now and going forward.

Independent agents must keep an eye up to see other risks that stand in front of customers, even amidst an unprecedented economic turndown due to the coronavirus pandemic. One, in particular, is flood risk, and it tends to be underinsured for businesses after liability, property, workers’ compensation, and other risks.

The good news is that the NOAA forecasters “do not expect it to be as severe or prolonged overall as the historic floods in 2019.”

But, as of late March, NOAA called out three key factors as contributing to “increased chances for flooding across the central and southeastern United States.” Those are ongoing rainfall, highly saturated soil, and a higher likelihood of above-normal spring precipitation.

These commercial flood insurance policies are a means to insure business buildings and equipment. They cover foundation, electrical and plumbing, equipment, furniture, inventory and more. Coverage is limited to $500,000 for the building, plus $500,000 for building contents.

NFIP has for 40 years been the gold-standard product for flood insurance. Yet, since the Biggert-Waters legislation rate increases and the market dislocations brought by Superstorm Sandy in October 2012, NFIP has been in a state of massive change. Perhaps most significantly for business owners, flood insurance prices have been heading upward especially in commercial lines.

But what many agents might not know is that the insurance industry has developed an increasingly competitive market for private flood insurance for businesses and families. These alternative flood insurance products can be used in place of or in conjunction with NFIP coverage.

The early leaders in private flood insurance have tended to be in the excess and surplus lines markets. But many U.S. insurers offer these products through a brokerage division or relationship.

While prices for private flood products may be more appealing, there are key distinctions that every agent must present when quoting these policies.

First, communicate with your customers that private flood insurance policyholders may face nonrenewal of their coverage. By contrast, an insurer administering NFIP policies must allow the renewal of the coverage.

Second, when a business switches from an NFIP policy to a private commercial flood policy, it can lose the grandfathering of its premium rates.

Third, if the private flood policy is nonrenewed, that business faces the standard 30-day wait to get NFIP coverage and has its rates based on the current year. A skilled carrier underwriter will check for all the appropriate discounts when returning to the NFIP market, but it makes sense for any agent to ask for these.

What does this mean to the independent agent?

There are some key takeaways: