CEOs ranked these 10 states as the best in the U.S. for business, according to Chief Executive magazines 2015 "Best and Worst States for Business" survey.

Some states are more business-friendly than others. Whether you’re president of a large corporation or an insurance agent running a small business, tax rates, regulations, growth stance, and the quality of life found in your state have a big impact on your business’ success.

According to the 2015 results of Chief Executive magazine’s ”Best and Worst States for Business” survey, chief executive officers (CEOs) in the United States favor states that foster growth through progressive business development programs, low taxes and a quality living environment.

In the annual survey, completed by 511 U.S. CEOs, states were measured on three categories to achieve their overall ranking:

In 2015, one state remained the best state for business for the 11th year in a row. Can you guess which state has a hold on the No. 1 spot?

Here are the 2015 top 10 states for business according to Chief Executive magazine.

CEO comment: “Greenville, South Carolina is outstanding in its location for workforces access, quality of life and logistical access via Interstate and oversea containers coming through Charleston into the U.S.”

In addition to low taxes, a quality workforce, reasonable housing costs and favorable weather conditions, Arizona continues to attract and keep big-name businesses such as Wal-Mart, FedEx, Honeywell, JPMorgan Chase and dozens of others.

During 2015, Louisiana showed strong improvement in attracting and retaining technology businesses, while also benefitting from a downstream position in oil and gas. CEOs are pleased with the state’s industrial incentives, cheap energy and non-union workforce.

The only Midwest state to make the top 10, the right-to-work state’s business growth strategy has been paying off. Indiana boasts 68 company headquarters, including Cummins, Eli Lilly, Brightpoint and Delta Faucet Company.

Georgia is experiencing business growth. Its low tax and regulatory hurdles, along with a high-quality workforce and a strong living environment recently attracted Mercedes-Benz.

CEO comment: ”Georgia works very hard at both attracting and keeping businesses with jobs in the state.”

Tennessee is becoming a center for automotive industry manufacturing, including a Nissan plant in Knoxville.

CEO comment: “Low taxes, and no state income tax is key; you can have an educated workforce and low state taxes; that is why I put Tennessee first.”

North Caroline continues to outpace other states in new job growth, and dominates the south in areas such as laptop exports and agriculture. Tobacco is still the state’s leading grown product.

This southeast state, which has held its second-place position for four years, has much to offer businesses, including a world-class infrastructure, flexible enterprise zones and tax credits for R&D.

CEO comment: ”Florida is making all the right moves as a great place to work and live. Property taxes are high though.”

Since the recession began in December 2007, 1.2 million net jobs have been created in Texas, while 700,000 net jobs were created in the other 49 states combined. From climate to transportation to cost of living, Texas has proven it can’t be beat.

CEO comment: ”Texas is pro-business in terms of taxes, licensing, incentives, as well as quality of workforce.” 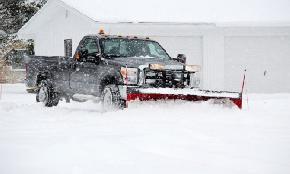 Snowplows: Is equipment covered under a business auto policy?

Coverage Q&A: The question asks how collision damage can be covered under an auto policy for a vehicle's "mobile equipment."

The costliest U.S. weather activity in 2019 made up nearly half of the year's total losses.