Staged auto accidents and fake insurance adjustersPIP fraud is a heavy cloud hovering over the sunshine state. Seven related arrests last month is just a drizzling of the storm.

Five people have been arrested for their involvement in a staged accident scheme in Orlando. Lufaite Olizia, 40, and Tracey McFarlane, 40, were charged with insurance fraud, patient brokering, and intentionally staging a motor vehicle crash. Pierre Antoine Joseph, 41, Madeline Emile, 28, and Yolando Denise Roberts, 39, were also arrested for participating in the scheme as passengers and subsequently filing fraudulent medical claims.

An investigation by the Florida Department of Financial Services’ Division of Insurance Fraud revealed that Olizia and McFarlane solicited participants to intentionally stage a motor vehicle accident, which occurred in Orlando on July 10, 2010. Prior to the staged accident, Olizia and McFarlane met up at a convenience store where they planned the crash. During the meeting, Olizia promised to pay Joseph, Emile, and Roberts $1,000 each to file fraudulent medical claims with clinics of his choosing. 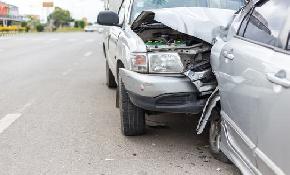