Not Your Average Insurer

MutualAid eXchange Insurance Company (MAX) is a reciprocal insurer owned by its members--and safely can be described as unlike any others.

MutualAid eXchange Insurance Company (MAX) is a reciprocal insurer owned by its members–and safely can be described as unlike any others. The company generates $22 million in gross written premium–$15 million in the U.S. and $7 million in Canada–and operates in 16 states and five provinces with 12 different product lines.

“Although we have the size of what most often would be a one-product, one-state company, we have dramatically different needs,” says Paul Heacock, CIO.

MAX was the end result of a merger of 10 mutual aid companies from around the U.S. and Canada, relates Heacock, and with those mergers came the usual sort of problems. 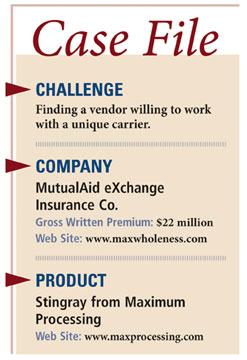