Reader response to my June 14/21 column about the latest brouhaha over disclosure of producer compensation ("Don't Ask, Don't Tell?") was fast and furious.

By Staff Writer | July 04, 2010 at 08:00 PM | The original version of this story was published on National Underwriter Property & Casualty
X

Reader response to my June 14/21 column about the latest brouhaha over disclosure of producer compensation (“Don’t Ask, Don’t Tell?” at http://bit.ly/cmLboP) was fast and furious.

In the column, I commented on the legal challenge to a New York disclosure regulation taking effect Jan. 1, 2011, filed by the Independent Insurance Agents and Brokers of New York and the Council of Insurance Brokers of Greater New York. I sympathized with the insurance department, which wondered what producers might be “trying to hide.” 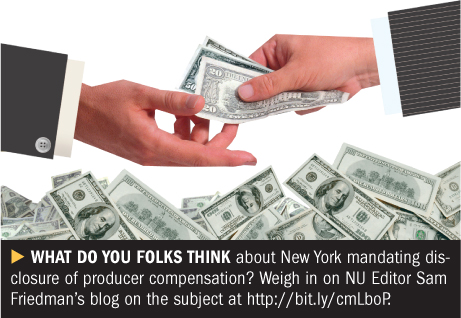 I got an earful on my June 1 blog posting (http://bit.ly/bslXNG) that served as the basis of my column. The following are edited sections capturing the gist of the arguments presented both for and against New York’s pending regulation, and my contention that it would make more sense to go along and get along rather than make a stink in court, which I said would only serve to undermine the industry’s already questionable reputation.