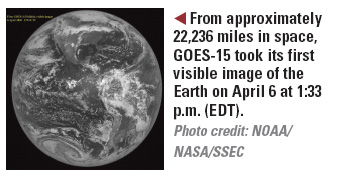 Geostationary operational environmental satellites enable NOAA forecasters to track life-threatening weather — such as hurricanes, floods, and tornadoes — along with solar activity that can impact various industries.

Now the fourth (and final) operational satellite in the agency’s latest line has snapped its first visible image of Earth. Launched on March 4 from Cape Canaveral, Fla., GOES-15 joins three other NOAA operational satellites designed to capture higher resolution images of weather patterns and atmospheric measurements than those provided by earlier satellites.