The Tropical Meteorology Project at Colorado State University (CSU) has released its predictions for Atlantic basin hurricane activity in the new year. 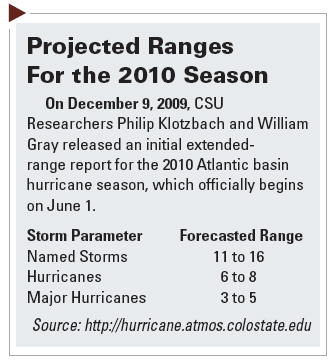 The Tropical Meteorology Project at Colorado State University (CSU) has released its predictions for Atlantic basin hurricane activity in the new year. This initial extended-range forecast arrives on the heels of a relatively tame season during which only nine storms developed. Of those, three turned into hurricanes.

By contrast, CSU Researchers Philip Klotzbach and William Gray expect 11 to 16 storms to form in 2010.